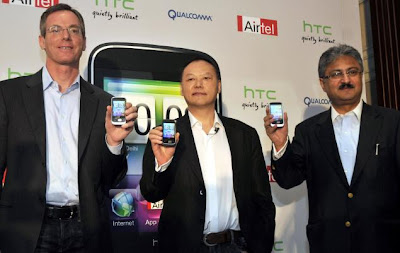 HTC and Bharti Airtel today announced an exclusive partnership to launch the HTC Smart in India in collaboration with Qualcomm. The HTC Smart marks HTC’s strategic focus on India, the fastest growing telecom market in the world. HTC Smart, an easy-to-use and affordable smartphone, aims to create a new category of smartphones by bringing the globally acclaimed HTC Smart to the masses.

“HTC has always focused on setting the stage for new mobile experiences and the HTC Smart is clear differentor from touch phone and the result of customer feedback from all over the world for an easier-to-use, affordable smartphone,” said Peter Chou, Chief Executive Officer, HTC Corporation. “We’re excited to launch the HTC Smart with Airtel in India first and Qualcomm, a company known for its innovations. HTC Smart offers easy-to-use widgets, browsing and connectivity at an affordable price. The integration of HTC Sense brings an unparalleled smartphone experience for people looking to do more on their phone.”

The HTC Smart incorporates the latest cutting-edge features and is powered by Qualcomm’s Brew Mobile Platform™ operating system. The stylish device sports a 2.8-inch TFT-LCD touch-sensitive screen with QVGA resolution and is equipped with a 3.5 mm stereo audio jack. The HTC Smart also includes a 3.0 megapixel color camera with fixed focus and flashlight.
Posted by Gaurav Shukla at 2:01 AM

iPhone 3GS in India with Airtel for Rs 35K

Well iPhone 3GS has landed in India finally. It was launched today on Airtel with a price tag of Rs 35,500 for 16 GB version and the 32 GB variant for Rs 41,500. We haven't heard from any other carriers yet about their plans to introduce the iPhone 3GS.
Posted by Gaurav Shukla at 5:39 PM

The BlackBerry Storm 2 has finally arrived in India.

A 3.25 inch capacitative touchscreen, a 3.2 MP camera with flash and video recording, 2 GB of onboard memory storage with a support for 16 GB microSD card, 3.5 mm audio jack, GPRS/EDGE/Wi-Fi connectivity, built in GPS and 6 hours of talktime on 3G networks.
Posted by Gaurav Shukla at 4:20 PM

The Indian cellphone market is flooded with close to a hundred handset ‘brands’ and this week witnessed the launch of yet another brand – INQ Mobile (pronounced as ‘ink’) of the UK.
INQ Mobile has now tied up with Aircel to launch its first phones in India – the Mini 3G and Chat 3G. Today, we take a look at the Chat 3G, which hits shelves across the country tomorrow with a price tag of Rs 7,599.
Priced at Rs 7,599, we think that the INQ Chat 3G is a cut above the rest when it comes to online social networking. If Facebook, Orkut and Twitter are the words that you live by, there is no better phone out there in the market. Top it with Aircel’s Pocket Internet plan that costs Rs 98 a month for unlimited Internet browsing (with a fair use cap of 2 GB) and we think we have a winner out here.
Posted by Gaurav Shukla at 1:46 PM

"The financing was over-subscribed with major international banks committing to underwrite the total amount," the company said in a statement.

Bharti Airtel and Zain were in exclusive talks for quite a long time, in Bharti's third venture attempt to acquire an African business after having failed in its bid twice for South Africa's telecom giant, MTN.

Last year, Bharti failed to strike a merger with MTN. The deal was later called off due to regulatory issues in both countries.
Posted by Gaurav Shukla at 1:44 PM